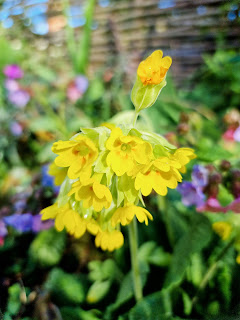 This self-set cowslip comes back at the top of the lawn each year. This time looking particularly vibrant in yesterday's fresh spring sunlight.

Included below are two poems. The first is an alternative version of the one I posted the time before last. I worked and reworked the piece, pushing it further and further away from narrative towards a kind of gnomic abstraction, I realise now. I used to do that sometimes when reviewing. Worrying at the brief texts until they became stark, rigid in form and expression and I had to re-find more yielding, more human drafts.

I don't know whether everyone will agree with that analysis but I hope this new-older iteration is more immediate and nuanced.

The second poem goes with the post on the Wolf Moon of 18 January.

Oxford full term has now ended. Where did those eight weeks go!

The week before last was especially intense. Taking part in an online Research Data Management workshop and a giving a talk on Oxford's Latin American Collections in London, and preparing for both, in between time off as a result of a stomach bug.

Going to London on the train was not something I'd experienced since before the pandemic. The Tube strike meant a two and a half mile walk each way, which proved unexpectedly fun. I saw lots of landmarks that I remembered from when I was a boy, on visits to see my gran. Even walking past the place where I was born - I don't think I've ever been so physically close to that place in... well, a very long time!

I joined readings given on Zoom by three Ukrainian poets at the end of last week. They read from towns caught up in the war. It was profoundly moving and inspiring. (More details on this in due course.)

Yesterday I was treated to lunch at the White Hart at Fyfield. It was great!

I was sitting in the Hemingway,
a bar I'd never heard of
in a city I never imagined I'd visit.

I was thrilled
to be at the conference,
flight paid for by the university.

It should have been a proud moment,
pleased for myself, pleased for
Dad
and how proud he was of me.

The end of the first day,
time for reflection and a pint of Burton,
burger and chips ordered.

But first,
opening the browser on my new phone
I thumb-stumbled to the site I'd been told about.
The London Gazette.
Worked out how to search it.

First Mum's page, then Dad's.
They'd been bankrupted individually
though the debt I'd only discovered
a fortnight before was
both theirs.

Just under a million.

Whenever I achieved something -
the theatre set that got me my one
school tie (I loved the blue and silver stripe
wouldn't have wanted any other) -
all Mum could talk about was what she'd done.
Always, of course, unattainable.

On the morning
before it became the wolf,
I walked to the shed to get logs.

As I returned,
there it was to the north west,
low, still waxing gibbous.

Behind the trees
in the manor gardens.