Gosh, it's taken quite a while to catch up with everything after our holiday.

Doing so has been tiring at times and I wonder whether there's something more to it. The weather, maybe, or perhaps a kind of post-pandemic effect, as one gets to grips with the new-old. There are  several events and services that we used to do at the libraries but which couldn't happen during Covid. Dusting these off and thinking one's way back into past processes, where the information is, whether it's still current where we are now - all of these tasks take time but, more than that, need a series of mental recalibrations.

So, Covid still has the capacity to make the world seem very strange (understatement, given the global chaos...).

Meantime, the apple trees in our garden - and the pear, laden with flowers - blossomed, including the Lord Lambourne in the photo. Am hoping the absence of frosts means a great harvest!

Joined colleagues from four major libraries (British Library, Cambridge, Oxford and Senate House) to take part in a webinar on UK Latin American collections last week. It was organised by LANE, which is the Latin America North East Libraries Consortium of SALALM, the US Latin Americanist librarians organisation. It was a wonderfully enjoyable event to prepare for and to deliver. Loved working with colleagues from both sides of the Atlantic. And, the recording is available on YouTube.

I also enjoyed, at the very beginning of our holiday, doing a life-writing piece for the Iris Murdoch Review. It brought back many happy memories of when we spent some time with John Bayley and Iris Murdoch in the early 90s, and of John's kindness from several years before then. He was my mentor and I owe him so much. I hope the article passes the editorial team's scrutiny and comes out in the autumn. Whatever happens, though, it was a privilege to work on it.

Oh, and while I was writing the piece, I took a little time out to put a bet on Noble Yeats in the Grand National. Was bowled over when it won! Though I can take no credit as a tipster. I just went for the horse with a poet's name...

I hope I'm right in identifying this plant, seen in the University Parks, as a Berberis. There are quite a few of them and they certainly are striking.

Have had a week off - that should be, Am taking a week off. I'm in danger of wishing - or at least writing - the week away.

And it's been wonderful to have a break from work. Doing a bit in the garden and on the allotment. Also had a day out in Oxford midweek. A pint in a pub we've been going to since I was an undergraduate, which is still pretty much the same as it always was. Excellent Adnams and atmosphere. The Rose and Crown, North Parade, as it happens. Then lunch at the Cherwell Boathouse (another favourite - which has changed a bit, and for the better, and which we've been going to for as long as the Rose). Creatures of habit, clearly.

But before these, we spent a couple of hours at the Pissarro exhibition at the Ashmolean. Really amazing! Fantastic works by him, of course, but also by his contemporaries - Cézanne, van Gogh, Sisley, and so many more. I was especially struck the paintings Pissarro did of his wife and family. The picture of his nine year old daughter, Minette, painted a few months before she died, her hair cut short to try and ease her fever, was so moving to see.

Making a gap in the curtains,
seeking the thrill of the sky, I am
disappointed, 'Just an ordinary night.'

No stars, no moon peeping
round the corner of our neighbour's.
Not even the hint of shapes
of clouds.

An ordinary sky. How often
have I assumed without realising,
'Just an ordinary...'?

The incomprehensibility of stars,
hidden behind what is seen.
Moon orbiting earth,
the unquantifiable riches of our world.

How often have people consigned
me to ordinariness? How often
have I written myself off in those,
or worse, terms?

Let me value ordinary miracles -
I might not wake, when the dawn comes. 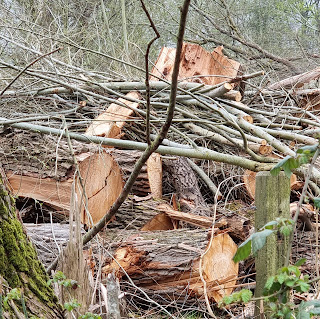 Lots of debris on the Marston side of the University Parks rainbow bridge. Extraordinary textures and movement in the strange, sad heaps of limbs.

A cold snap since the balmy times of just a week ago...