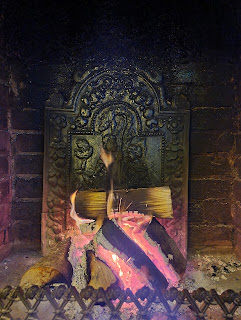 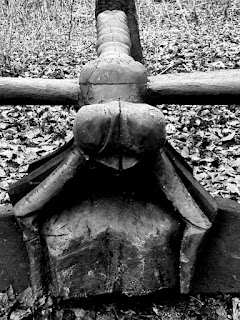 A second walk round the Sherborne Estate. This time with cloud hugging the land, the daylight almost suffocated, darkness close by. But still invigorating.

Features of the walks are the wood sculptures, including this dragonfly bench near the ice house.

Wonderful to have a break from work and to enjoy being at home, not working from it. The time flies, though. Every fleeting moment is precious. 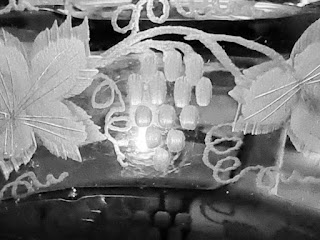 A terrific walk round the Sherborne estate north of Burford earlier.

Then lunch watching the final episode of Wives and Daughters. What a weepy that was! Next up, North and South.

Quite a nineteenth century time, this Christmas: picking up The Tenant of Wildfell Hall where I left off a while back (about half-way through). Now racing through the chapters!

Tried a red Sancerre at lunch - pinot noir from Domaine Cherrier (http://cherrier-pere-fils.com). A pinot like no other! So full and rich! 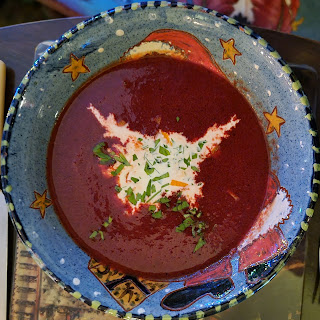 Lovely walk east of the village, above the river earlier. 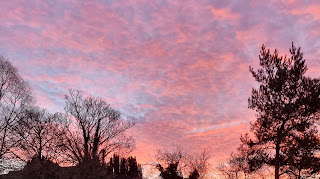 This afternoon we walked the village, delivering Christmas cards with our dog, now not far off a year old.
Last Christmas we were  on our own and grieving the loss of our wonderful terrier. Wondering, I dare say, whether we would ever have another dog. But then a friend of a friend told us of a puppy and here we are. The house is complete again.
Today's card deliveries took place on a lightless, occasionally thoroughly wet, Christmas Eve, which by the end of them was scythingly cold, at least on the hands.
Early yesterday before work (wfh, after three days in Oxford at the Latin American Centre Library), I went to the allotment to do the Christmas Day harvest. Amazing, after a not too good year for winter veg, to be able to lift enough beetroots for our traditional soup, as well as parsnips and carrots. We also have the last of the onions and lots of potatoes, hanging from the rafters in sacks in the shed at the house.
Warming up after the card delivery, I sit by the fire, having read a fascinating article in the TLS about Iris Murdoch and what Christmas meant to her, which draws on her archive at Kingston University. It made me want to read A Word Child, which I have never read, and to re-read other novels. It also brought back memories of Iris and of John, her husband, who were so kind to me. I noted, though, the reference to their 'picturesque house Oxford home' in 1978. Hum - they were still very much in Steeple Aston (and would be for a decade more) then, which is 20 miles to the north.
Now about to tuck into some cheese, which John would have approved of. I remember him putting a piece, wrapped in a napkin, into his pocket after lunch at St Catherine's, 'For Iris.'
No comments: 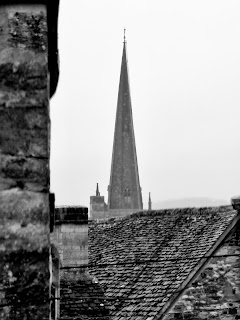 A wet afternoon in the Cotswolds but a great day.
Walking near the Barringtons and Windrush then Christmas shopping in Burford.
No comments: