a while, making time, healing, the excitement of reading!, newness within the old traditions, pyramidal orchid, abundant veg 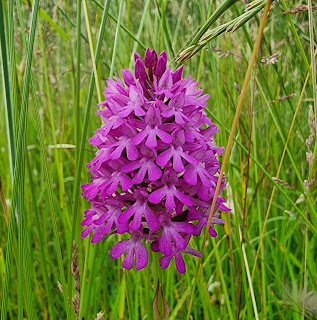 It has been quite a while since I posted last.

Not long after the late June one, we took a week off, part of it spent in Wiltshire (deep in the countryside - deep space). It was there that I realised how exhausted I was after the academic year. A kind of depletion that I've not known that frequently - and I'm thankful for it. After Oxbridge, certainly. After I'd found a new job, having been made redundant. You keep going, respond to all the demands. It's when the pressure eases that you are walloped.
So, I've continued to work but I've also tried to make as much time around that for myself and J and for healing.
I've found reading therapeutic - including the beautiful, involving, shocking, universal The Paper Palace by Miranda Cowley Heller. I've not yet finished it but I read at every opportunity. It's so good to find a novel like that. It reminds me of the excitement of reading that made me want to study literature and to write fiction myself.
For a time, as mentioned in the previous post, I had to stop walking because I hurt my foot (I had a relapse too). That was a challenge. But now, after a few weeks of walking and cycling again, I'm feeling much better.
I've started walking the route I rediscovered in June again - it's one that I think I avoided because of the memories of walking it with Tufty.
The photo of the pyramidal orchid was taken on this walk back in June - there are quite a few catch-up photos to be posted. I only ever saw the one plant in the old water meadows but one was plenty of itself!
One of the biggest delights recently was taking our new dog on this walk for the first time. Newness within the old traditions. Completely reinvigorating.
In the garden, things have shot away, what with all the soakings. Amazing lilies - and flowering rushes - in the pond. Lots of apples, including some fruits on the new trees for the first time. Blackcurrents from the allotment, and scrumptious firmishly-skinned and buttery-inside broad beans. Fulsome spuds and first courgettes and runners. The allotment is not pretty, what with the weeds and so little opportunity to pull them in between downpours, and some crops have failed, but overall, much that is abundant and delicious!
No comments: 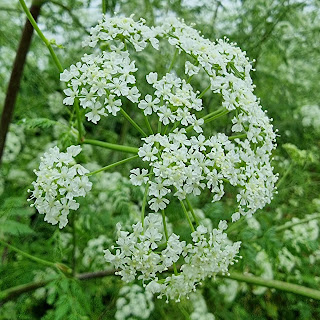 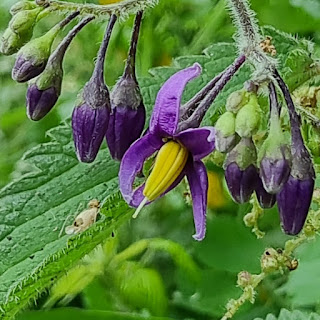 Toe injury put paid to walking for over a week. So good to be out in the fields again today!

Hemlock thick in places. Bittersweet more discreet.
End of Oxford Trinity Term today. End of the 2020-21 academic year. Like no other, but we got through it! Not that all courses are respecters of academic years. Creative Writing ones often never stop.
Chilly today - log fire. Couldn't have imagined that a week ago.
No comments:

comfrey, alive, downton abbey filming, it takes you back 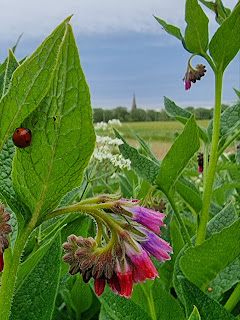 A comfrey hybrid, a ladybird, the Downton Abbey church - and more.

The green lane is alive with green, and with colourful flowers.

And talking of DA, there was some filming going on this week, although I didn't see it. By all accounts it didn't last long. Probably some second unit stuff. The first feature film didn't have much of the village in it and perhaps the second will be the same.

Not like when they were making the TV series - I well remember being curious about this new unknown programme back in 2010: 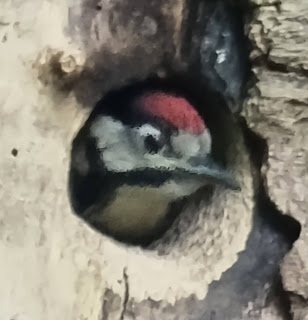 I was alerted to the great spotted woodpecker's nest on the edge of the village by a friend in mid-May.

Although I couldn't see any sign of the chicks at that stage, I could hear them (link below).

At least I thought it sounded like there was more than one. Recently, though, the cheeping got louder and singular. How disturbing the natural world can be!

Looking at the hole, I began to wonder whether chicks ever got too big to get out... But then I suspected I was imposing my own DIY and construction skills. The woodpeckers have it covered.

Yesterday, I caught sight of the chick.

This morning the nest was silent and I imagine it has flown!

striking, intense, rain, behind with the garden and allotment, 'normal', crafty 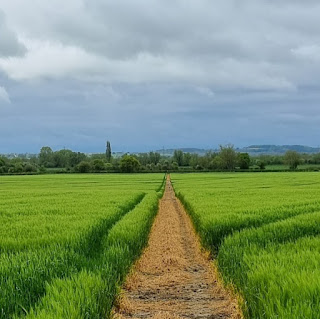 A striking sky and an answering intensity in the field of young corn where the larks sing below where once was RAF Bampton Castle Signals Station.

Since this photo was taken, a week or two ago, there has been more rain and the lushness of the landscape continues. Only today does the sun shine with the strength one might wish for.

We're behind with the garden and allotment but are hopeful that we might catch up next week.

Also keen to get back to 'normal'. But what a crafty virus we're faced with.

bird's egg, scene of? ..., mystery of the victorian cabinet, cabinet of mysteries (though with labels, if only it could be found) 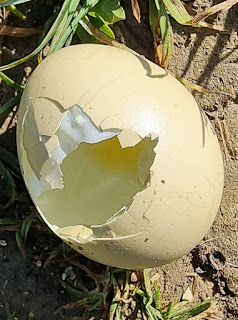 A place of life or of death? Of a successful hatching or of predation?

I hope the former.

I don't know what bird's egg it is, I'm sad to say. Was never very good at identifying eggs. My dad knew and once had a collection. Somewhere, I don't know where, I think we have a Victorian cabinet of eggs with labels saying what they are.

Its whereabouts as mysterious as the egg I saw itself. And ours is not a big house. 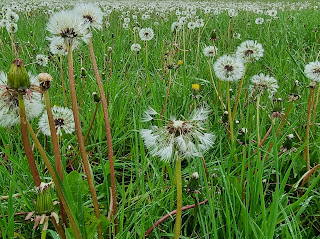 Worked in Oxford today but made time to walk through the Highmoor Brook water meadows, the Plantation, and the Ham Court green lane before setting off.

Dandelion clocks thick in the meadows.