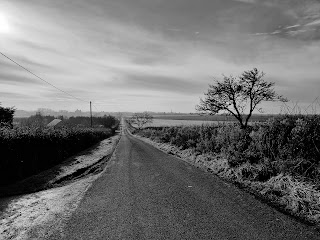 From the village to the incline of the mount -
mount?
It's what it's called but I never know
whether it's a joke.
I suppose everything's relative and from the top,
the country dips and rises -
the start of the Cotswolds,
I like to think.
And somewhere, I've read that the village
is the Gateway to them.
But, is it? Or is that a travel agent's
ruse?

But ...
On the straight, after the brow,
looking, dangerously, forgetting how
pitted and pot-holed the Tarmac is,
you can imagine you've
leaped from flat earth - the
Polder Lands, Victorians called our wide,
wide stretch of the river's planes -
to vistas and rolls that make poets
lyrical and estate agents skip.

In the far distance used to be the
power station with its micro-climactic
cloud.

But now it's gone.
Or has it?
I can never remember whether the papers
said they'd left one tower -
and sometimes I have fancied I can see it.
There!

At the junction, I turn back and
soon climb the longer, gentler slope.
After the straight, the road and fields falling;
the village, the near-thousand-year-old spire ...
The old part, the new part, the newest part,
that everyone says spoils the view.
But then you think,
Am I being a NIMBY?
And on a day like today, the sun
coming through, traces of mist softening the buildings,
you wonder what the fuss was about,
where the truth lies. 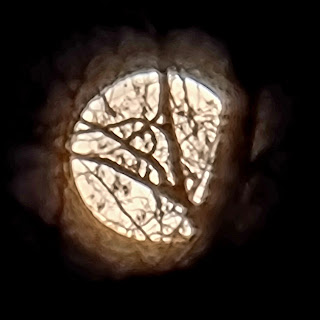 On the morning before it became the wolf, I walked to the shed to get logs. Returning, there it was to the north west, low, still waxing gibbous behind the trees in the manor gardens.
No comments: 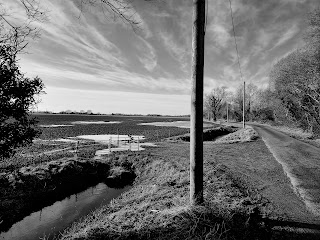 After the ice melted, I went on a cycle ride through the winter-sunned countryside. So different to the slatiness that capped all enthusiasm yesterday.

This photo was taken looking back along Calcroft Lane (aka The Gated Road - no longer with its gates) near Clanfield, our neighbouring village. The field on the left is enormous, usually planted with corn and either greened by winter corn or fallow at this time of year. This time, though, sheep graze on strips of fodder roots.

The water is lying on this and many fields.

Cheesy beetroots with ham later - thanks J! - the beetroots harvested just before Christmas having lasted longer than expected.

Mice have been nibbling spuds and wrecking Hessian sacks in the shed. Monsters!

The freshness that was there at the start of the working week after the holidays has survived but with Oxford 0th Week beginning today, tasks mount.

The new phase of the pandemic, living with Covid, is as weird as anything that has come before. Though one can't help but clutch at the encouraging words of optimists. 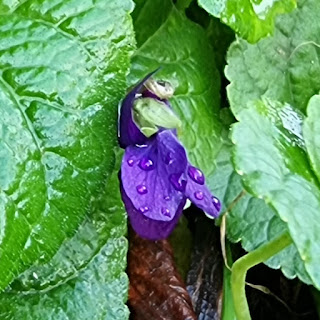 First violet of 2022 - on a verge, between Queen Street and Bushy Row, Bampton.