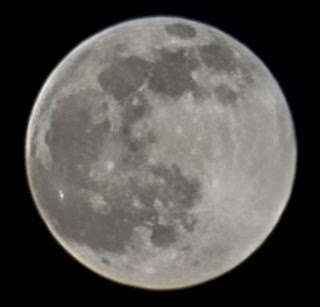 Must be because term is so busy, everyone doing the usual things plus picking up plans that were shelved during the pandemic.

Took this photo of the full Snow Moon earlier in the week. Spot the difference between it and the one I posted in April last year: https://morethoughtsnstuff.blogspot.com/2021/04/day-before-full-moon-pink-moon-hazy.html. That time it was the Pink Moon, the day before it became full. Both photographs were taken from the same place - just outside the back door. I would have expected differences between the geography in one and in the other, on the assumption that the moon might have turned a bit over the previous ten months but then I'm no doubt showing my ignorance.

Here's a poem - it's a vignette taken from what for much of the time was an exciting and happy trip to Canada (see https://justthoughtsnstuff.blogspot.com/search?q=toronto). The poem is a work in progress. I meant to write about that evening before. It never made it into Trust: A family story but has remained fresh in my mind, though with the passing of time, the perspective has changed.

The end of the first
day of the conference.
A time for reflection.
A pint of Burton,
burger and chips ordered.

It should be such a
proud moment: pleased for
myself, pleased for Dad
and how proud he is.
But I haven't spoken
to him for weeks.
Does he even know
I'm here?

I open the browser
on my new phone,
thumb-stumble to the site.
The London Gazette.
Work out how to search it
properly.

First Mum's page, then Dad's.
Bankrupted individually
by her cruel obsession,
though the debt that I
only discovered
a fortnight ago, is
both theirs.

Whatever I achieved -
the theatre set that
got me my one
school colours tie
(I loved the blue
and silver stripe,
wouldn't have wanted
any other) -
all Mum talked about
was what she'd done and
what she was going to do.

What people
were doing to her:

We should have known: