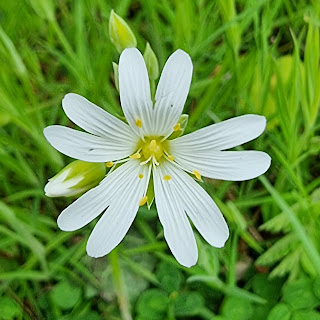 Saw lots of stitchworts when I was cycling the northern slope of Mount Owen.

I wanted to call them lesser stitchworts but the way the petals are cut - about half-way down - and the largish leaves suggest greater.

Apparently the plant was used as a remedy for stitches.

Had to do the last few yards of the slope on foot because the wind was too strong - and it wasn't as fierce as it's supposed to get later this afternoon.